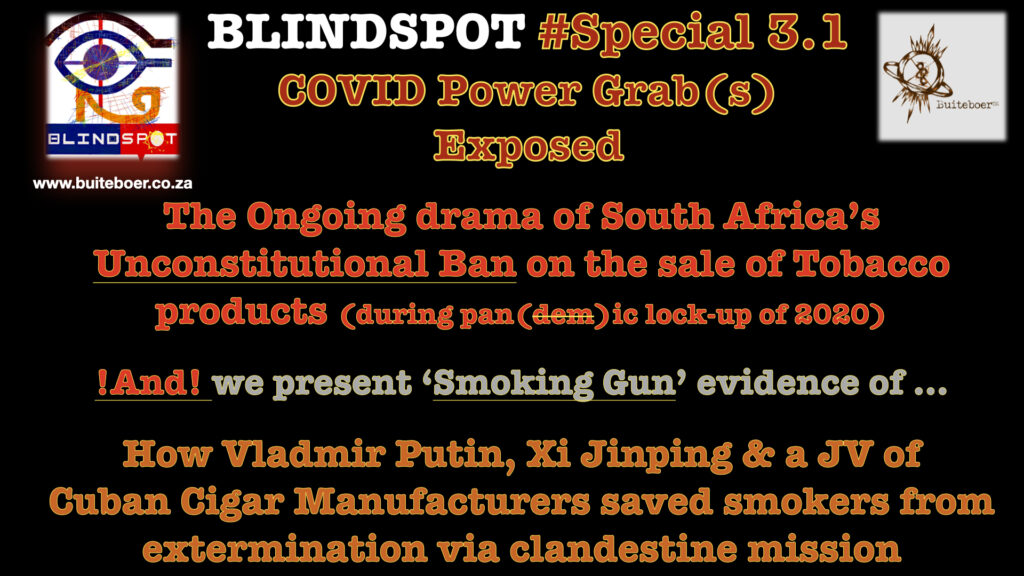 We share this, free & gratis. An extract from Buiteboer’s book – Searching for Madness in the Method: this is not a survival guide to autopilot’s disease and the turbulent twenties of the twenty-first century.

We do this to celebrate the fact that in June 2022, the South African High Court of Appeal, ruled, like the Western Cape High Court, in December 2020, that the ban imposed on the sale of tobacco products, as part of COVID-19 lockdown and national lock-up procedures, was in fact, unconstitutional. This means South Africa’s cabinet has a minister declared doubly unconstitutional by the courts!

In a world where, in the name of combatting a pan(dem)ic, manifold human and civil rights have been violated, it is impossible to catalogue all statist abuse actions. Here we look at evidence of madness in the method of the South African government decision to ban the sale of tobacco products, in order to fight the COVID-19 pandemic.

In the course of the next special Blindspot deliveries we chronicle the madness in the method of the South African government banning the sale of smokable product, unconstitutionally, and how it plunged smokers into a banana republic of smuggling and criminal conduct for a smokable score… 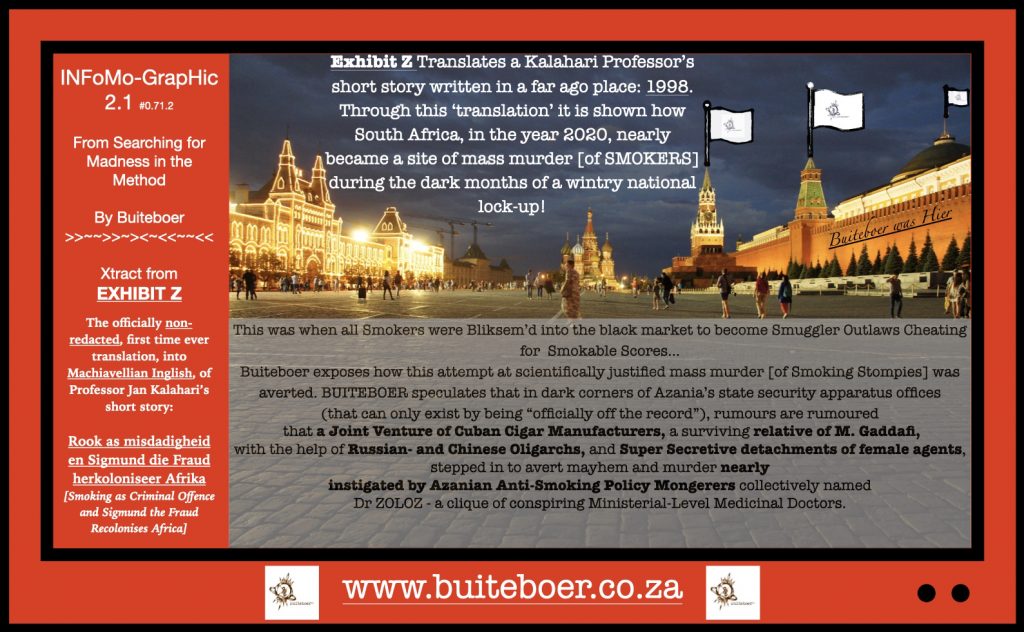 Buy the eBook ->> Searching for Madness in the Method here...

For the record, during the period of April to August 2020, both alcohol and tobacco were banned, leading South Africans buckling under nicotine & alcohol withdrawal symptoms, to think they’d suddenly fallen through the looking glass, into a Banana Republic.

During the five months of April to August, 2020, smokers and drinkers may be excused if they started thinking very paranoid thoughts, such as that a faction of the Islamic State had infiltrated, and taken control of the National Corruption Command Council (NCCC).

Gradually they were turning democratic Mandela’s Republic into The Islamic Republic of SouthAfriCaniStan under the leadership of Hajji Dr ZOL & NCCC, with four basic laws:

No Smoke, No Drink, No Dancing, No Nothing.

A list of important dates covered in the video version Blindspot Special 3.1…

Coming to eyeballs close to you soon!

The nuts & bolts of the prophetic short story from the long ago time and place of 1998, penned by Prof Jan Kalahari aka Ian Liebenberg. We encourage all to read the full free text of the chapter, verse and story shared here. But, for those averse to reading more than 170 characters on a screen we shall endeavour to summarise in voice & video form.

The summarised sections of the translation of Prof Kalahari’s story we are covering here:

IV – Techno-science to the rescue