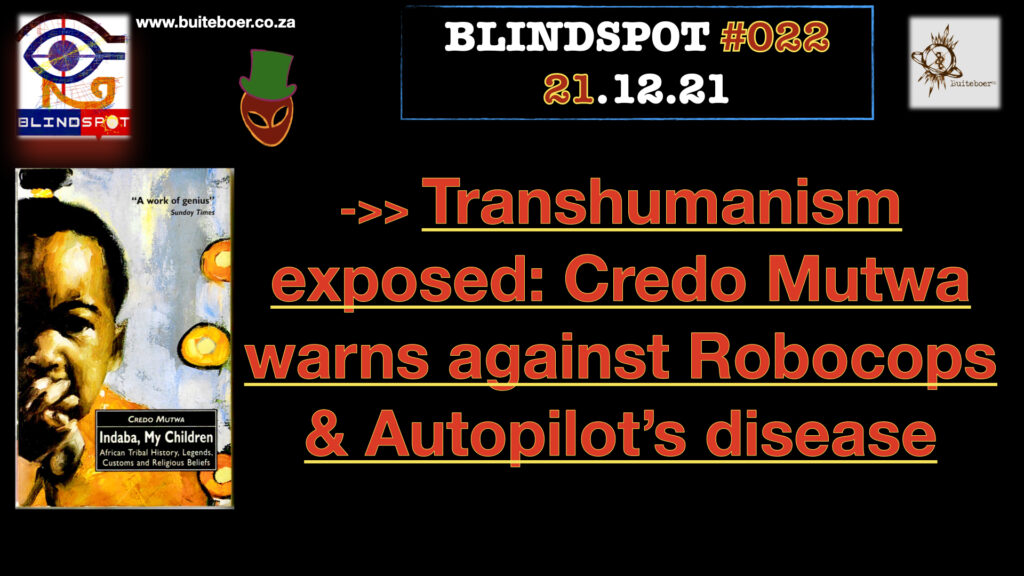 Click on the image below to find out more about Searching for Madness in the Method, and to purchase the ebook... 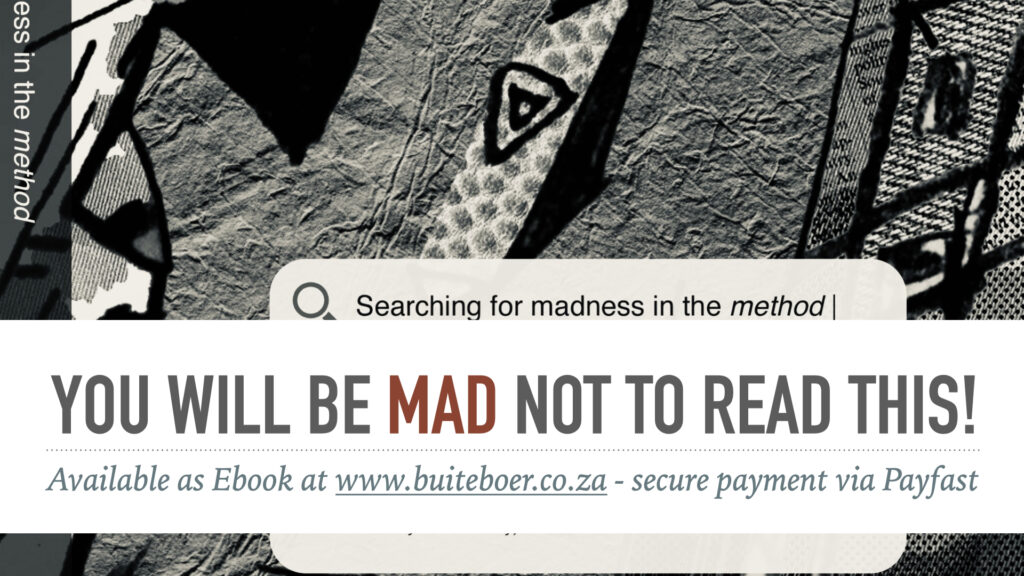 The sample chapter 21, from Searching for Madness in the Method

21. A Flashback – Credo Mutwa and the ancient wonder of the Self-Driving Hut

If a new, and more associative research praxis is needed in the turbulent twenties of the 21st century, it may be necessary to open the brackets of method and stylistic strictures. What ‘Method’ usually does is to chop all flights of fancy and imaginary journeying off by the knees. Method, if seen in a purified textbook lab-condition (with Sociologists/Psychologists/Politicologists and purists of the Quant & Qual worlds at play) it (Method) would most definitely not allow an essay on ‘Method’ to suddenly insinuate a story from a legendary, mysterious, and profoundly wise South African – Vasemazulu Credo Mutwa, into the veins of this essaying text.

However, luckily this essay is clearly not about Method, writ with capital – M. As announced on the cover page, this is indeed a search mission aiming to identify madness in the method, and in so doing to determine whether there are any Nonsensical concepts and survivors worth rescuing at the site where Method crashed on the shorelines of Pan(dem)ic World, and showed, once and for all, how Mad it, (Method), was, in the first place.

If the interindividual in this century is confronted with the techno wet dream of a life of comfort and luxury driven by an ecosystem of interlaced and interfaced autonomous- and semi-autonomous systems, then it may be interesting to take a quick Shot’Left into the lands of the ancients.

Credo Mutwa, in the opening sections of Indaba, my children, tell the story of the origin of origins, and how humans appeared on planet earth. Most strikingly though, the story of the fantastic reign of the First Chief on earth – Zaraleli.

In this ancient first time a deformed child was born. According to the legends, the wise two headed Kaa-U-La birds warned the mother that great evil will come into the world if the child is to survive. Refusing to oblige to their demand of killing the child, she flees into a deep cave to hide. But there, in that deep cave this child sat at a fire, staring into the flames he melted iron ore from which appeared metallic insect-like creatures. With this self-proliferating army of metallic envoys he conquered the world, and established the first human empire. But, before the emergence of Zaralelli’s empire, in that cave, Mutwa tells us,

“The woman shrieked with horror and undiluted

fear when she realised her son was in fact creating-

That the tune he was humming was an incantation-

To assume a shape and Life!”

Is it not fascinating that, according to Mutwa, the evil in the world started with a child casting a kind of magic spell to form iron according to his will. The metallic creature is described as,

“She watched spellbound as the living thing grew

And legs like those of a grasshopper took shape-

Then came pairs of dragonfly wings

And a rat-like shining metal tail, with a sting,

With his conjured metallic flying insect-soldiers he conquered the world. According to Mutwa, this, the first human empire was the most fantastical the world had ever seen. Mutwa indicates that this was the empire of Amarire, also known as Murire,

“…in which men lived in shining golden huts

With a life and a conscience of their own.

They could move from place to place

In accordance with their occupants’ wish.”

Not only did this ancient first empire of humans sport self-driving huts that could transport the occupant from sea to mountain, if that Person desired a change of scenery.

No, this first empire lived in a world of animated ‘things’. For example, ingredients for a meal could be placed in a pot, which would then cook itself with no human intervention (today we only have slow cookers that still need buttons pushed and electric cords plugged into ESKOM juice). So-called metal Tokoloshes tilled the fields, tended the flock, and took care of everything (today we do have robots doing our bidding, but, seemingly the first empire on earth had a multitudinous horde of such). Not only that, but, in this first human empire on earth, pots of beer would come floating through the air and deposit contents in an open mouth (imagine a Shebeen where the Hansa, or double whatever, come graciously floating through the air to deposit its contents into an open waiting mouth). But, the result of all this ancient techno-magic is that humans became lazy and useless. The end of the first empire of humans comes with their surrender to an ancient magical science- and associated technology.

As we consider the techno-horizons open to humanity in the turbulent twenties, is it not appropriate that a story from the ancients say that in a hypothetical deep mythic past, delegation of human functions to magic machines and animated things, led to their downfall? Does Mutwa tell a story of the past, or the future? Does Mutwa’s legend of the self-driving hut warn us of something yet to come?

‘Method’ squeals from the sidelines, but, Madness tell us that, in an associative way, the slice of legend from Mutwa’s work connects present and ancient past, with the past being a force potentially revealing distances of the future. Method moans that this is mere myth and blabber about urban legends from the deep jungles of time. But, be it as it may, is it not revealing that those ancients, however mad we perceive this story to be, had the thought of a self driving hut in the first place. Elon Musk/Tesla, UBER, or Google’s self-driving car projects pale into insignificance in the face of Mutwa’s Self-Driving Hut. The ancients’ imaginary power is on display as it evokes floating pots of beer, and imagine a world where toil is taken up by metallic Tokoloshes (robots).

The Ancient Egyptian dictum, as it is above it is below, comes to the fore. Applied in current context: as it was in the ancient imagination, it is in today’s digitospheric imaginary. Mutwa reminds us of not only an ancient possibility, but more so, of the unthought consequences of the Dictatorship of the Digitosphere (DoD). In the case of the ancients it was their laziness and surrender to their magic-carpet self-driving Hut auto-Beer-Pot (Magic-Tech) world, that led to their ultimate deterioration and demise. Does Mutwa disclose something of the potential outcomes of Autopilots Disease? The ancient laziness and surrender to Magic-Tech, is perhaps exactly the same phenomenon as the problem of Autopilot’s Disease?