Blindspot #013 – Rise of Iran, and, is AUKUS as Braindead as Biden and NATO? 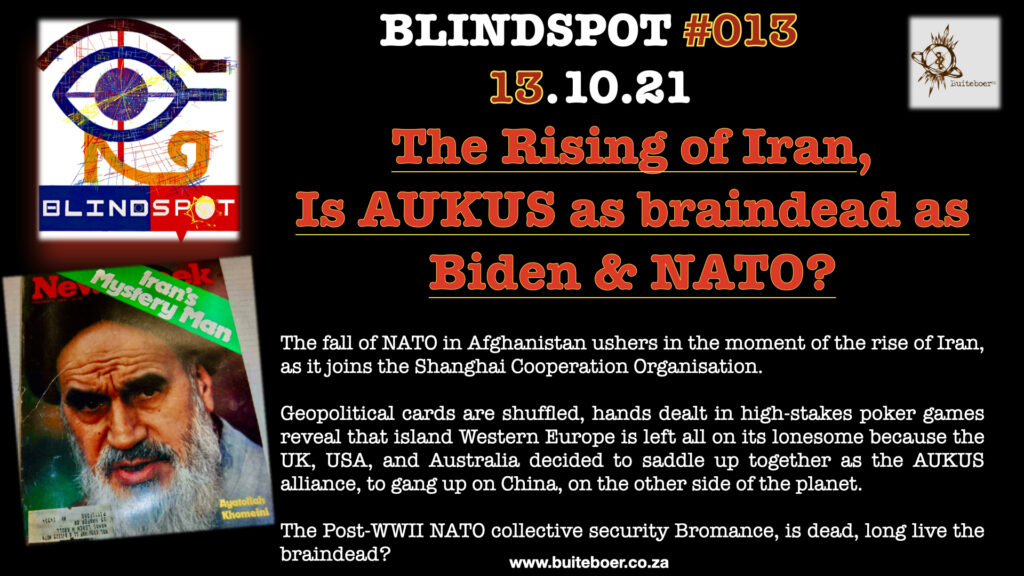 To view Blindspot #013 - click here to visit the Blindspot channel on Rumble.

Blindspot wants you to see the world others don’t.

As noted in Blindspot #012, Chinese pressure on Taiwan continues relentlessly. This at a time when the trans-Atlantic, post-WWII, strategic bromances between NATO members have not just been tested, but in actual fact totally destroyed by President Biden blind-siding the French out of a strategically significant nuclear submarine project due to be delivered to Australia.

The deck of Geopolitical cards is being shuffled, hands dealt in this high-stakes poker game reveals that island Western Europe is left all on its own. The UK, USA, and Australia decided to gang up on China, on the other side of the planet. The announcement and unveiling of AUKUS – a strategic alliance between the USA, UK, and Australia, of course has the august purpose of consolidating their collective strategic posture in the Pacific region – facing China.

It is clear that the power relations that kept the post-WWII trans-Atlantic detente going, in the form of NATO (among others) have frayed, and snapped. Europe will likely forge ahead with the further development of the concept of an integrated pan-European defence force having lost faith in the trustworthiness of the USA, as evidenced in its behaviour in Afghanistan, and in the case of side-lining the French.

Blindspot asks whether President Macron’s statement some time ago about NATO being “Braindead”, also applies to AUKUS? But, all jokes aside, AUKUS is likely a major nail in the coffin of NATO, while regional strategic balances of power continues shifting.

Blindspot #013 explores, in this context, the rise of Iran, through its formal ascension to full membership of the Shanghai Cooperation Organisation (SCO). The country has been patiently waiting in the wings, as observer, for ten years. Behind the AI policed headlines of mainstream media, Iran has stretched its influence into Iraq, Syria, Afghanistan, and other known-unknown hot sites of 21st century proxy wars such as Lebanon (of course), and Yemen.

If anything will be shown by history, it is that the fall of NATO in Afghanistan ushers in the emergence of Iran, as accepted, and strategic partner in the region. Major powers such as China, and Russia understand the significance of the Islamic Republic of Iran – and that, its reach- and influence, has significant sway in the region.

As covered in Blindspot #010 – Posthuman geopolitics and drone kill strikes, the assassination of General Soleimani, head of the Iranian Revolutionary Guard Corps, by US drone strike in Baghdad (January 2020), is exhibit A of the extent to which Iranian reach and influence brought the eye of a destroyer drone to fix on, and kill, the second most powerful person in Iran, at the time. That says something about the geopolitical reach, and hidden-hand power Iran wields in surprising ways beyond its besieged borders.

Asian, Middle Eastern commentators and analysts argue that following NATO’s evacuation of Afghanistan, the SCO is the one multilateral organisation with the most influence in the Eurasian region – which is a significant blindspot to cover in contemporary geopolitics. Iran’s ascension as member of the SCO therefore consolidates a geographic-political alliance anchored in the concept of common defence, as well as development. The Belt Road initiative is, among other grand geopolitical projects that have been re-shaping the region under Chinese, and Russian leadership, but one significant ‘beneficiary’ of an SCO that fully incorporates, recognises, and integrates Iran as regional anchor state.

The fall of NATO in Afghanistan, prompted by a US Saigon-style departure from Kabul’s rooftops, therefore paves the way not only for an internal Taliban re-capture of the state. It is evident that the sanctioned and ‘isolated’ giant of the region, Iran, now has an opportunity to cast off the exile imposed on it by powers who had just fled from twenty years of shooting themselves in the foot in Afghanistan.

Iran’s rise to full member of the SCO is not only a recognition of its unacknowledged power, reach, and historical significance in the region, but additionally signals a major geostrategic shift in the ‘balance of power’.

With NATO out of Afghanistan, Iran in the SCO, and rumours doing the rounds of Chinese military ‘advisors’ (or such) spotted in Afghanistan riding shotgun with the Taliban, it is clear that the balance of forces on the grand chessboard of the Middle East and Eurasia have tipped in favour of forces from the East, and South. This is a Blindspot of epic proportions, leaving a gap through which monsters and myths like that of the ‘rise of the King of the South’ can jump… Like a Monty Python, Life of Bryan moment of insane seriousness.

But, lets look at a short Hitlist of strategic disasters that have befallen the transatlantic ‘order’ and its infrastructures of violence (in the form of NATO, among others):

Exhibit A: NATO left Afghanistan recently, and bequeathed the fledgling Islamist order a total of more than $80 billion worth of military equipment. Not bad for a statist dowry to start a fresh chapter of rule by the rod of Sharia law – as interpreted by the Taliban.

Exhibit B: Turkey, ostensibly a NATO member is at just about every turn in the geopolitical road at odds with the interests of its NATO partners. In the Mediterranean Turkey is increasingly unapologetically projecting its power and military influence. Or, in cases of migration, and the handling of conflicts in Iraq, Syria, Nagorno Karbakh, or Libya – Turkey is striking out as regional power claiming its stakes in the face of a crumbing NATO. Recently Turkish hawks were heard whispering the Crimea is actually not Russian, but Turkish turf! Now, go and put that in your google pipe and smoke out some data in a frantic search for geopolitical meaning at moments of madness masquerading as method.

Exhibit C: Brexit and the exit of the UK from the common EU project has implications of strategic significance that became apparent only recently when the Biden administration acted in grand unilateral fashion by side-lining and cutting France out of a deeply significant nuclear submarine project for Australia. Bojo from Britain was very obliging and complimentary of this strategic chimera that will only have one consequence – a further intensification of the nuclear, unmanned- and technology wars already raging in the Pacific, and across the digital glacis of planet earth.

AUKUS, ostensibly a strategic alliance of UK, USA, and Australia also appears in a period where tensions in the Pacific region are intensifying by the day – centred on Taiwan. Bringing a ‘Western’ alliance of nuclear capable forces to bear on the strategic balance of forces in the Pacific is most definitely adding fuel to the fires war that may erupt as soon as 2022 – as covered in Blindspot #012 – China’s collapse [NOT], and its 2022 Taiwan take-down.

Exhibit D: Iran becomes a member of the Shanghai Cooperation Organisation. In the wake of the NATO evacuation of Afghanistan, this secures Iran’s position as regional power, and as recognised international state actor with strategic significance and influence, particularly in Afghanistan, Iraq, Lebanon, Yemen and Syria. Long gone are the days of George W Bush’s ‘Axis of Evil’ which featured Iran as Prime-Evil No1.

Business Insider. 5 most controversial choices for Time person of the year. https://www.businessinsider.in/5-of-the-most-controversial-choices-for-TIME-Person-of-the-Year/Ayatollah-Khomeini/slideshow/67034139.cms